What is Kaitlin Olson's Net Worth?

Kaitlin Olson Net Worth: Kaitlin Olson is an American actress, producer and comedian who has a net worth of $50 million. She is best known for her role as Deandra “Sweet Dee” Renolds in the FX comedy series “It’s Always Sunny in Philadelphia” beginning in 2005. Her net worth is a combined net worth with her husband (and fellow “Sunny” star) Rob McElhenney.

Early Life: Kailin Willow Olson was born in Portland, Oregon, on August 18, 1975. Her father, Donald Lee Olson, was a publisher, and her mother, Melinda Leora, was a nurse. She was raised in Spokane, Washington, and Vashon Island, Washington (in Puget Sound) until her family relocated back to the Portland area when she was eight years old. There, she grew up on a farm in the city of Tualatin. Olson attended Tigard High School in Tigard, Oregon, graduating in 1993. She then continued her education at the University of Oregon, where she studied theater. After graduating from college in 1997 with a Bachelor’s degree in theater arts, Olson moved to Los Angeles so she could pursue a professional acting career.

Quotes that Inspire by Kaitlin Olson

Many are probably wondering about the foundation behind Kaitlin Olson's success and wealth. Below we have listed some of the actor's quotes that will get you in the mindset to pursue your financial success.

I'm drawn to the funny brand of comedy. 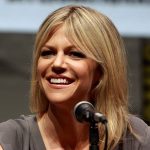 I was really shy.

The greatest relationships are often the unexpected ones.

I feel like people only want to hear me say funny things. Like, I don't tweet about my kids or being a mom, ever, because I'm very aware that that's annoying for people to hear.