Early Life: Verne Troyer was born Verne Jay Troyer on January 1, 1969, in Sturgis, Michigan. His mother, Susan, worked in a factory, and his father, Reuben, was a repair technician. Verne grew up with younger sister Deborah and older brother Davon, and he told “The Guardian” that he almost didn’t make it past infancy, stating, “My parents found me unresponsive in my crib, after being laid low with an infection. As we were Amish, we only had a horse and buggy to get to the hospital, but that wasn’t going to be quick enough so we borrowed my aunt’s car. My parents were told there was nothing that could be done and Dad whisked me away to another hospital, where I was put in an oxygen tent, and thankfully I recovered.” The family left the Amish religion when Troyer was very young, and he said that his parents never treated him any differently than his average-sized siblings and that all three Troyer children had to carry wood and feed the farm animals. Verne enjoyed playing football during his youth, and he attended Centreville High School in Centreville, Michigan, graduating in 1987. In 2003, the school put up a plaque in his honor.

What is Verne Troyer's Net Worth?

Verne Troyer Net Worth: Verne Troyer was an American actor and stunt performer who had a net worth of $150,000 at the time of his death in 2018. Troyer is most widely recognized for his role as Mini-Me in the “Austin Powers” film series. He was also a cast member on “The Surreal Life” in 2005 and played Griphook the Goblin in 2001’s “Harry Potter and the Philosopher’s Stone.” Due to a condition called cartilage–hair hypoplasia, Verne stood 2 feet, 8 inches tall and might be the shortest performer in the history of Hollywood to became a star in such large proportions. His career in show business began in 1994 when he worked as a stunt double for a nine-month-old child in the comedy “Baby’s Day Out,” and he went on to amass more than 50 acting credits during his lifetime. Thanks to his silent but expressive comedic performance, Verne Troyer won positive reviews from both critics and fans.

What is the net worth of Verne Troyer? What is his zodiac sign? Here is Verne Troyer in a nutshell:

Quotes that Inspire by Verne Troyer

Many are probably wondering about the foundation behind Verne Troyer's success and wealth. Below we have listed some of the Actor's quotes that will get you in the mindset to pursue your financial success.

I was pretty bad when I was younger. 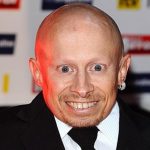 I was working at a candy-wrapping factory before I became an actor. I admit I snuck some hard candy, which is great because you can suck on it while you’re working.

We grew up Amish, but my parents left the religion when I was a child. The Amish have lots of rules, and my dad thought many people in the faith were hypocritical because they’d tell others not to do something and then do it themselves.

We were doing the dance routine and I dislocated my knee. I’ve been doing stunts for a long time and it’s kind of weird that I’d dislocate my knee just dancing.

There’s nobody else that can double me – except for a doll.